What do you think of when you hear the word “radiation”?

Whatever comes to mind, I bet you didn’t think cellphones!

In order to understand the harmful effects of radiation that cellphones may expose to your health, we must first have a solid, basic understanding about what radiation is:

Radiation is energy that comes from a source and travels through space and may be able to penetrate various materials. Light, radio, and microwaves are types of radiation that are called nonionizing.

[In comparison], ionizing radiation… can produce charged particles (ions) in      matter. [It is] produced by unstable atoms. Unstable atoms differ from stable      atoms because unstable atoms have an excess of energy or mass or both. Radiation   can also be produced by high-voltage devices (e.g., x-ray machines).

Atoms with unstable nuclei are said to be radioactive. In order to reach stability, these atoms give off, or emit, the excess energy or mass. These emissions are called radiation. [1]

Very high levels of radiation are extremely dangerous. For example, some people with cancer may elect to have radiation therapy, which aims to target a specific location in the body to destroy cancerous cells. Such radiation treatment can be done internally or externally; however, the unfortunate side-effects are well known. Fatigue, nausea and vomiting, hair loss, headaches, etc., are due to high levels of radiation.

Long-term, chronic exposure to radiation is also extremely damaging to body cells, which greatly increases the risk for cancer over time. In fact, as a part of warfare, radiation was emitted by means of nuclear explosions or atomic blasts, and in the several years following, devastating cancerous effects were seen.

Radiation that is transmitted through technology is known as radio frequency radiation (RFR). Some examples of these technologies include:

The International Agency for Research on Cancer (IARC) has claimed RFR to be a potential causative factor of human cancers, after which statement, authors from Frontiers in Public Health compiled evidential research regarding radiation and health saying:

A broad range of adverse human health effects associated with RFR have been reported since the IARC review. In addition, three large-scale carcinogenicity     studies in rodents exposed to levels of RFR that mimic lifetime human exposures have shown significantly increased rates of Schwannomas and malignant gliomas, as well as chromosomal DNA damage. Of particular concern are the effects of RFR exposure on the developing brain in children. Compared with an adult male, a cell phone held against the head of a child exposes deeper brain structures to greater radiation doses per unit volume, and the young, thin skull’s bone marrow absorbs a roughly 10-fold higher local dose. Experimental and observational studies also suggest that men who keep cell phones in their trouser pockets have significantly lower sperm counts and significantly impaired sperm motility and morphology, including mitochondrial DNA damage (2019). [2]

Of even more concern, a European REFLEX study performed displays evidence that “prolonged radiation from a cell phone and magnetic fields can cause genetic damage similar to that caused by radioactive radiation.” This means that DNA damage is being directly affected by radiation emitted by cell phones. Genes are being affected at the cellular level!

While the research study states there are 49 studies that confirm DNA damage associated with RFR; contrarily, there are nearly 42 studies funded by wireless industry or the US Army, in which no DNA damage is identified. [3] Evidently, there is a large concern for bias in regard to research funding.

Questionably, is it any wonder that a “break” from technologies leaves us feeling lighter, happier, and more energetic?

While limiting self-exposure from daily stressors such as social media, cellphones, work, television broadcasts, etc., is a major factor in stress-relief, perhaps the refreshing and serene feeling of peace often experienced from escaping technology and “unplugging” for a weekend getaway, can more accurately be attributed to a decrease in RFR exposure. 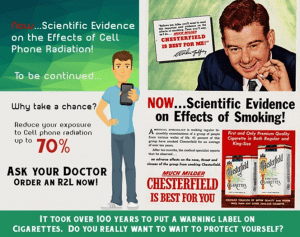 Cell-phone manuals often have “fine print” warnings within the user manual, cautioning the user about the potential negative health effects from radiation when the device is carried or used close to the body.

The Federal Communication Commission recommends keeping your phone 5 to 25 millimeters away, depending on the model, to limit radio frequency (RF) exposure to safe levels.

‘If you carry or use your phone in a pants or shirt pocket or tucked into a bra when   the phone is ON and connected to a wireless network, you may exceed the federal guidelines for exposure to RF [radio frequency] radiation.’ [4]

Many people have advocated for warning labels to be clearly attached to cellphones upon purchasing. In fact, such protests had success when a law to mandate warning labels regarding RFR on cellphones was passed in Berkeley, California.

While radiation warning labels, upon the purchase of cellular devices, are not yet required in all states, we can still do our part to reduce exposure to RFR.

Take action to protect yourself and your loved ones by keeping your phone a safe distance away from your body or by appropriately placing an R2L device on the backside to reduce radiation exposure.

The R2L device “converts cellphone radiation into harmless light”! With this radiation converter, you will no longer need to worry about keeping a safe distance from your phone.

You are the master of your own health.

Come to the office today to purchase an R2L device at a discounted price! 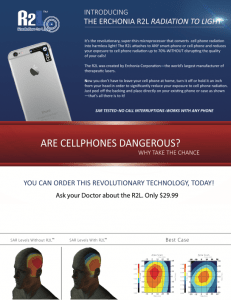 1- Health Physics Society. (2016). What is radiation?  Retrieved from http://hps.org/publicinformation/ate/faqs/whatisradiation.html

Want to join the discussion?
Feel free to contribute!

Anxious for the Holidays?
Scroll to top